Poseidon Water is a privately held company that develops and invests in water projects throughout North America. Poseidon offers customized solutions to meet the water needs of municipal governments, businesses and industrial clients. The company's innovative approach to project development, financing, asset management and community outreach makes it a leader in water resources development. In the last 10 years alone, Poseidon's management team has structured, arranged, invested in and completed more than $2.8 billion in major public and private sector projects.
​​
With a primary focus on large-scale reverse osmosis seawater desalination plants co-located with coastal power plants, we partner with water agencies to deliver water infrastructure projects. Our partnership approach is structured to implement water infrastructure solutions in a reliable, environmentally sound way and at a competitive cost compared to new sources of potable drinking water. The company holds multiple patents for both desalination systems and the integrated treatment of brackish concentrate and seawater. Learn more at PoseidonWater.com. 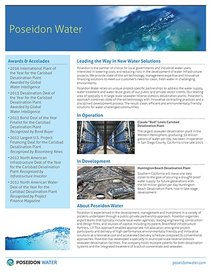 Operations and Maintenance Company
​The subcontractor, IDE Technologies has extensive experience developing engineering, producing and operating advanced desalination facilities, among other water and energy related projects. The firm has been in operation over 45 years as an Israeli state-owned enterprise to create advanced desalination technologies. The firm has researched and developed both thermal and reverse osmosis desalination technologies, with RO having been successfully deployed at scale in large and small scale operations. Currently there are about 400 IDE designed systems operating in 40 countries with a total capacity of about 528 MDG.
The firm has large-scale international projects in India and China. In 2008, it completed the world’s largest multi-effect distillation technology desalination plant in Jamnagar, India. In 2009-2010, it first completed, and then expanded to double capacity at 52.8 MDG a thermal desalination plant in Tianjin, China, now the country’s largest desalination plant.
IDE has completed some of the world’s largest RO desalination plants, including a 72.3 MDG plant in Ashkelon, Israel and a 91.8 MGD plant in Hadera, Israel. In 2010, the company was awarded a contract for a 108.5 MGD plant in Soreq, Israel. Much of the firm’s experience has been in Israel given its origin. Learn more at IDE-Techn.com.

Water Purchaser
The San Diego County Water Authority is a public agency serving the San Diego region as a wholesale supplier of water from the Colorado River and Northern California. The Water Authority's mission is to provide a safe and reliable supply of water to its 24 member agencies serving the San Diego region.
The Carlsbad Desalination Project is an important component of the San Diego County Water Authority’s long term strategy to improve the region’s water supply reliability by diversifying its supply sources. This strategy has allowed the region to reduce its dependence on imported water sources that are vulnerable to droughts, natural disasters and regulatory restrictions. The plant accounts for about one-third of all water generated in the county. Learn more at SDCWA.org.