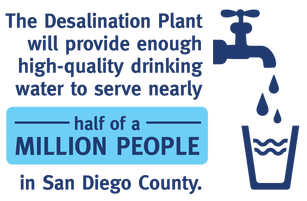 Desalination, often thought to refer only to the removal of salt from seawater, actually removes virtually any mineral and most biological or organic chemical compounds to produce high quality water suitable for drinking.

Desalination has long been used in regions of the world where fresh water is in short supply. In fact, the process dates to ancient times when Greek sailors purified seawater by evaporation. Desalination has evolved into a desirable water supply alternative by tapping the largest reservoir in the world - the Pacific Ocean. The technology, available for decades, is at work in many arid areas of the world including the Middle East, the Mediterranean and the Caribbean.
Desalination equipment is now in use in over 120 countries, including Italy, Australia, Spain, Greece, Portugal, Japan, China, India, Saudi Arabia, Oman, United Arab Emirates, Malta, Gibraltar, Cape Verde and Cyprus. There are over 21,000 desalination plants worldwide, producing over 3.5 billion gallons of potable water a day. Overall, desalination plant capacity has increased exponentially over the past 30 years. Saudi Arabia leads the world in desalination and relies on it to meet 70 percent of the country's drinking water needs.

Historically, the high cost of water production has been the key concern related to large-scale seawater desalination. Technological advances have made desalination a viable water supply alternative. Manufacturers of the RO membrane filtration systems have been able to produce filters that last longer and at much lower costs than just a decade ago.  It now costs less than 0.7 cents to produce a gallon of water at the Carlsbad Plant.

Desalination has also benefited from reduced operating costs in terms of electrical energy use - an important milestone since energy consumption can account for as much as one-third the total cost of the water produced. Other cost-saving advances include construction of large capacity plants, co-location with power plant facilities and enhanced competition by using Design-Build-Own-Operate-Transfer project delivery.

Prolonged drought, dwindling sources such as the Colorado River and Bay Delta water, and more stringent treatment requirements are driving up the costs of traditional water sources and triggering the need for alternative local supplies. Desalination is an environmentally friendly process that decreases the amount of additional water that would otherwise need to be imported from ecologically sensitive areas.  Desalinated Seawater is also the only water supply that is not dependent on snowpack or rainfall.

Modern day reverse osmosis technology used in desalination was born out of San Diego's own General Atomics in the 1960's. Today San Diego County is home to much of the international desalination industry, with over 35 desalination-related companies employing 2,200 people and generating over $200 million in annual revenue.

In San Diego County, we have an opportunity to put this homegrown technology to work. The Carlsbad Desalination Plant has significant economic benefit for the region, including $50 million in annual spending and 500 new indirect jobs throughout the region. 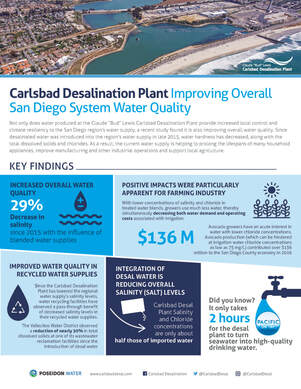